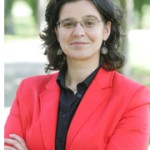 Monica Herrero Subias has a degree in Journalism from the UN and Master degree in Media Management from the University of Stirling. She concluded his European Doctorate, with Honors, in 2002. Two years later, she was appointed Director of Studies at the School of Communication, and since 2006 she has been Vice Dean of Students. Currently, she teaches Business Information, a field in which she has developed an intensive research on the analysis of the television markets. The results of this work are published as direct payment Programming and Television (2003) and The Market for pay television in Spain (2007).